The Moroncelo cropper pigeon – also known by the names: Moroncelo Kröpfer, Boulant Moroncelo,Buchón Moroncelo, Моронсело – is a varietal originating from Sierra Morena (Spain), which has not been informed since when it was developed. Some records show that starting from Moron de la Frontera (Seville), produced a very specific and temperamental varieties, then in the mid-20th century the variety was crossed with Valencian, then with Sevillano Laudino, also Collilano, and lastly with Morillero in the 1940s. From such a long journey, varieties belonging to this type Cropper-pouter pigeons finally get its current shape. These varieties are informed to fly well (able to fly far and long enough), but practically the development is now more intended for appearance. 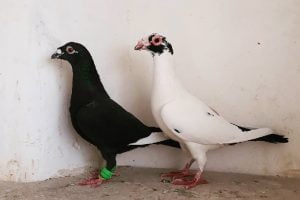