The Speelderke pigeon – also known by the name: Спилдерк – is a variety that originated in the Flanders region (Belgium), which has been developed since the 17th century. Varieties belonging to this type of Ringbeater Pigeons include very popular, both in the country of origin and in various other countries in Europe. This variety is known and loved in addition to its beautiful appearance, also because of its good flying ability. Some records inform that these varieties have unique behaviors, that is, when the breeding season, the males and females fly in circles, in unison, above the female, flapping the wings, at an altitude of only 50-100 cm from the ground, and only the strongest and most resistant males will get the female. 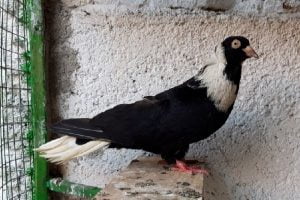