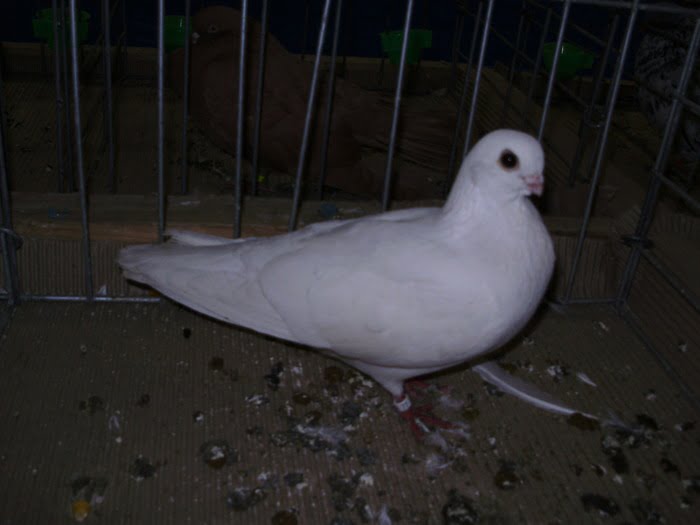 Loznicki short face Tumbler – or also known by the names: Loznicki Kurze  , Culbutant de Loznik à courte face – Origin: Loznitsa in Serbia, where it was created in 1960 from the Chinoptera Königsberg, German Short-billed Gulls and Pachans of Bachkan.

General appearance: small body, elegant posture, a cubic head, with a short beak and a wide chest.At the European exhibition of pigeons in Slovakia in the city of Nitra Loznitsky, short-face pigeons, which were brought out by the pigeon breeder Ratko Ivankovic, who turned 62, are recognized as a new breed. Thus, the efforts of the Loznitsky pigeon breeder who has been working on these birds for half a century are recognized in Europe, and he says with satisfaction:
– I started working on the creation of this breed in 1987, and I crossed Vienna short-beaked pigeons, German Rheinaugen and German Gulls. I put them in Slovakia, in the exposition of the Loznitsky club “Traditions”, and I am glad that you recognized them as a breed in the European context.
Loznitsky short-billed pigeons have a small body, a wide chest, a special shape of the head and beak, elegant posture, they are only white and do not look like any other breed.

As a new Serbian breed, they were officially recognized five years ago, and now recognized in Europe, ”said Ivankovic, long-time president of the Association of Serbian breeders of small animals and internationally instructing judge and expert on Komarnian pigeons. For the past forty years, he has been a regular contributor to Dovish shows throughout the old continent and in the former Yugoslav republics and Serbia. For many years he has been breeding Komarna pigeons, with whom he became European champion in Germany in 2002, and also collected about 500 trophies and awards and became the champion in 1974 in Hungary, in the country in which these pigeons were bred. Currently, there are about 200 birds in his farm and selection work is underway with another new breed, which will also be called “Loznitsky”.