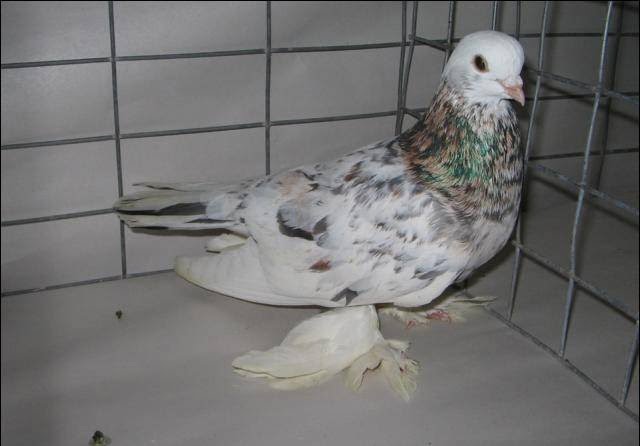 The South African Botternek Tumbler (Tortoiseshell) was developed and bred the deceased Boet (Jan) van der Walt of Pretoria Gardens .During 1954 Boet got hold of some Birmingham rollers with the unique colour of Almond / Tortoiseshell as well as some muffed tumblers, which were blue in colour with a white (bald) head.

Finally (1990), after 45 years of selective breeding and cross breeding, with muffed tumblers with white heads, colour and stance, the birds were ready to be registered as an independent breed.Boet van der Walt, Hans de Bruin, John Saunders and Charles Pottas put lots of effort into this breed to make it what it is today. The largest contributers in terms of development were the Van der Walt’s, from Pretoria and Krugersdorp.In May 1990, Jan van der Walt made a presentation, to get the breed and its standard recognised. ( via: fancypigeon.co.za )

compiled Freddie Theron, edited Johan van Hengel – If one looks at the Toys that we have at the moment, they have evolved from what they were in old days: The body and neck have remained almost the same, but the head now carries a bigger crest and a wider frontal. The muffs have also become longer and fuller. This has made this breed so much more beautiful and attractive to look at. I have heard numerous great comments from the public attending the shows.

In short: Toys are beautiful and attractive, a proud and lively bird and as a bonus a good, no nonsense breeder. Discussing the Toy, in line with the set standard, as comprehensive as possible (we must keep in mind that the personal interpretation of certain aspects may differ). If everybody has clarity as to what is required, we can all work together in breeding the ideal Toy pigeon. ( via : fancypigeon.co.za)