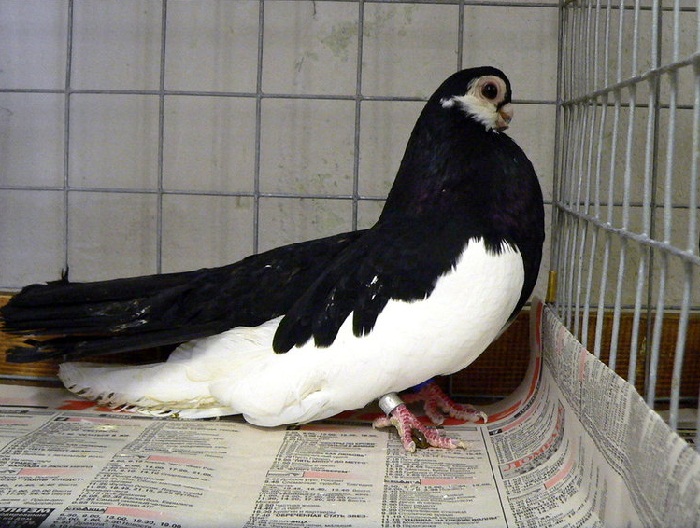 Moskau Black-magpied Tumbler ornamental pigeons – or also known by the names: Culbutant Pie Noir de Moscou, Moskauer Schwarzgeelsteter Tümmler, Capitombolante on Mosca Pica Nero – are varieties from Moscow and its surroundings (Russia), which informed as one of the ancient races, but no information has been found since when it began to be developed (possibly since the 18th century or earlier). The varieties belonging to the Tumbler pigeons type are very limited in information, including only being known to fly well. It appears that his appearance is also unique.

Moskau Black Magpied pigeon ; It is very popular in many cities of Central Russia. Its standards were officially adopted in 1912. There is little definitive data on the breed’s origin. Presumably, black and spotted tourmans were bred in the early 19th century. Crossing Oryol whites with Oryol beards. The best collections of black and spotted turmans belonged to Kaluga pigeon breeders. Therefore, pigeons of this breed were often called Kaluga tumblers.

In 1890, the breed was officially recognized, and black and mottled pigeons began to be displayed at exhibitions of the pigeon breeding division of the Russian Air Conditioning Association.

At the beginning of the twentieth century. The best collections of Moskau Black Magpied pigeon belonged to Moscow pigeon breeders. In 1910 a large exhibition was held pigeons for which VL Zimin won the Black Magpied Pigeon Grand Gold Medal of Moskau.

Mid 20th century. Most pigeon breeders in Russia kept Moskau Black Magpied pigeon in their enclosures as decorative pigeons. As a result, the birds became more sensitive and weak, many of them uninhabitable.

The now Moskau Black Magpied pigeon as a breed has practically disappeared. Some Moscow pigeon breeders are engaged in the restoration of this breed.