Chorrera pigeons – also known by their name: Chorrera-Taube, Чоррера – is a variety that some consider to be from Germany, but some breeders believe this is a Spanish breed pigeon that began to be developed since the 1800s. Now, the cultivar of Building type is widely grown in Catalonia, the Mediterranean and the southern part of the Iberian Peninsula (Spain), called “Colom d’Enreixat” in Catalan.

Spain has been breeding this variety for nearly 200 years and continues its trend – making it more suitable to be considered a Spanish pigeon. It was also grown in several other countries in Europe or on other continents. This variety is predicted to have a very close relationship with the Chinese Owl.

The primitive native tie pigeon appears as a result of the transition between “valencian figurita” and “Papataxi” ( primitive jacobin ) and / or the curly pigeon one ( frillback ).

It is a medium-sized bird with a length of approximately 22 centimeters, ranging from 250 to 320 grams, depending on whether the male or female is omitted. Its small head is backward with rounded corners. The forehead is slightly protruding and quite raised for its short beak, but a fist appears. You could say that the beak is an owl type. 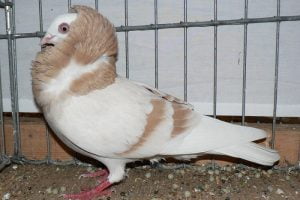